by My Cat Is An Alien & Joëlle Vinciarelli 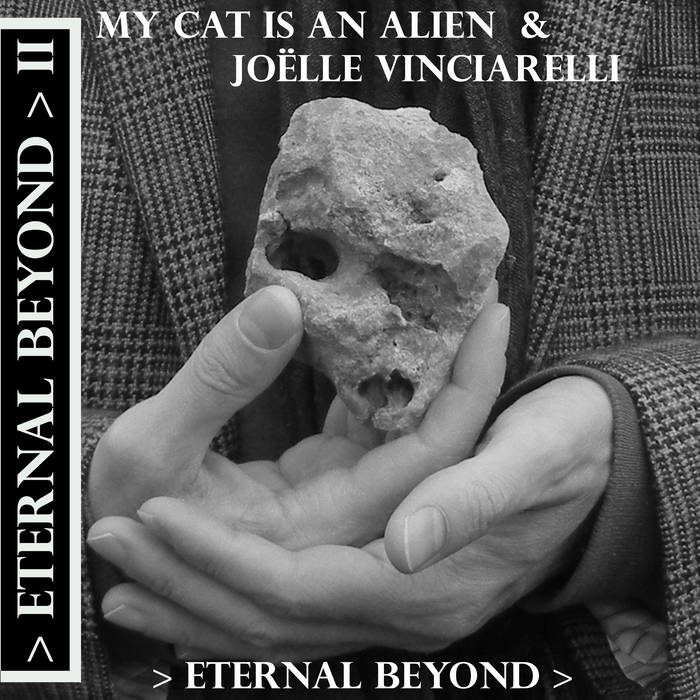 Lost Treasures of the Underworld

Chapter II in the ongoing, electroshock project > ETERNAL BEYOND > carried out by My Cat Is An Alien and Joëlle Vinciarelli. > ETERNAL BEYOND > proudly fights to act as a dangerous, conspirative unit escaping all radars of our GPS-controlled society, re-affirming once again the total freedom of its unique music and vision. This second release demonstrates how much the partnership between the two space-brothers Maurizio and Roberto Opalio and the “French queen of grunt” Joëlle Vinciarelli (Talweg, La Morte Young) is growing stronger and stronger, following uniquely their own language. The trio deliberately imposes upon itself a self-exile over the edge of the sub-underground, since today the foundation of the so-called “underground music” has been corrupted for the sake of mere mystification and sneaky business. > ETERNAL BEYOND > fights for Authenticity against Emptiness.

Thus, take all your well-known notions of avant-garde, experimental music, noise, free jazz, drone, raga, minimalism, maximalism, primitive folk, ancient ritual music, ethnic sacred chants, total improvisation: shake them all together… and then thrash it all! > ETERNAL BEYOND > is “The New Thing” of tomorrow, “The New Unknown”.

The two instantaneous compositions have been recorded at Joëlle Vinciarelli’s private studio located in the hearth of French Maritime Alps, at the foot of the esoteric Village Nègre at Col de Vence, a labyrinth made of rock formations tortured into evocative shapes inhabited by arcane spirits, well represented by the “alienanthropomorphous” stone picked up on-site and showed in Roberto Opalio’s hands on the record cover. The trio plays modified or self-built acoustic and electric instruments and devices, in addition to an antique upright piano soundboard and a pendulum clock mechanism from the beginning of the 20th century (“> ETERNAL ECTOPLASMIC COMMUNICATION >”). Roberto Opalio and Joëlle Vinciarelli’s braided wordless vocals aren’t but "Angels and Demons at play". Also, while Roberto Opalio paid tribute to William Blake in a title from the first album, here he pays homage to Dylan Thomas’ poem “Do Not Go Gentle into That Good Night” in the long, epic track “> ETERNAL RAGE AGAINST THE DYING OF THE LIGHT >”, bringing on the inextricable passion for literature and poetry.

The record comes out in marble red purple color vinyl in hand-pasted jackets, limited to 100 hand-numbered copies only, 'cause as affirmed by the "wanted-dead-or-alive" Opalio brothers (MCIAA) "we're all living the Middle Age of 21st Century and people who do really look for the real new thing must act fast and grab art before too late!"

REVIEWS:
[..] I am absolutely thrilled to report that this trio has now become a recurring project and that > ETERNAL BEYOND > II is every good as its predecessor (if not even better).
[..] the improbable collision of Vinciarelli’s "Cro-Magnon grunt and cultic energies" with the Opalios’ mind-melting, deep space lysergia is a perfect, unholy union, enhancing the brothers’ smeared and disorienting psychedelia with a healthy dose of seismic, elemental power.
[..] It is truly impressive that Maurizio and Roberto managed to unleash such an apocalyptic cacophony in real-time, as the crescendo of "> Eternal Rage (Against The Dying Of The Light) >" sounds like a heaving maelstrom of countless rusted steel strings being viciously attacked at once.
[..] Unsurprisingly, those ingredients make for quite a potent cocktail and "> Eternal Rage >" easily ranks among the best MCIAA pieces in recent memory.
[..] with > ETERNAL BEYOND > II, the Opalios and Vinciarelli evoke something significantly different that I cannot find anywhere else: the singular collision of the imagined past versus the imagined future, the spectral versus the corporeal, and flesh-and-blood humanity versus the unknowable, abstract vastness of the cosmos.
- ANTHONY D'AMICO - BRAINWASHED MAGAZINE (USA)

Instantaneously composed and performed by My Cat Is An Alien (MCIAA) & Joëlle Vinciarelli.
Recorded and engineered by MCIAA at Joëlle Vinciarelli's private studio in Saint-Jeannet, France.
Mixed by MCIAA at Alien Zone studio, Western Alps.
Mastering by Fabrizio Ronco. Produced by My Cat Is An Alien.
Titles by Roberto Opalio.
Artwork & layout by MCIAA. Shaman’s hands courtesy of Roberto Opalio. Photos by Maurizio Opalio.

All music copyright © My Cat Is An Alien & Joëlle Vinciarelli

© 2020 Up Against The Wall, Motherfuckers! / Opax Records