Once you'll touch the sky you will never return to dust 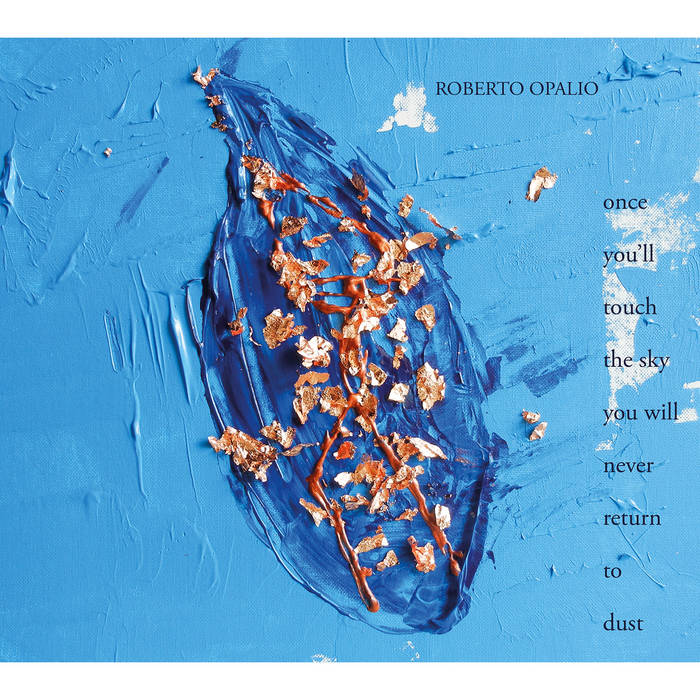 Cover and inner artwork: mixed-media painting on canvas board by Roberto Opalio, January 2018. Photographs by the artist.
Back cover: Roberto Opalio's portrait taken in Western Alps by Maurizio Opalio.
Design and layout by MCIAA.

DESCRIPTION:
‘Once you'll touch the sky you will never return to dust’ is the fifth studio album by ROBERTO OPALIO (“the more sinister half of MY CAT IS AN ALIEN” according to BYRON COLEY).
Along with My Cat Is An Alien’s ‘The Sky With Broken Arms’, this solo release officially opens the duo’s 20th Anniversary in 2018–a year rich of exciting projects, collaborations and releases.
In addition to his innate, idiosyncratic improvisation skill, Roberto’s contribution to My Cat Is An Alien was to give the project a strong multimedia and visual esthetics which still stands out as a distinctive trait. He indeed created the “alien cat” logo, My Cat Is An Alien’s trademark, which was initially hand sprayed on the handcrafted covers of MCIAA’s first ‘self-titled’ CD-R, then associated with the brothers’ own Opax Records private imprint, printed on posters and t-shirts, even used as subject of some of the duo’s artist books. Having been doing painting, glass art and photography for several years before MCIAA formed, his own works in visual art revealed a rich source of material to use as cover artworks of the band’s 200+ albums released worldwide so far. Especially, Roberto Opalio’s iconic figure of the “Alien”, “[..] a stick figure with widely extended arms and legs, its head a single sharply elliptical eye, permanently open and staring out at the universe that surrounds it [..]” (Ken Hollings / THE WIRE), symbolizing the transfiguration of the existential vision of the last human being on Earth, gets painted, drawn or sculpted in iron wire in most of his works, including his “cinematic poetry” films projected during MCIAA’s live performances. Photography had a great impact on MCIAA’s imaginary as well, Roberto capturing with b&w 35mm films, slides and Polaroids thousands of views of his hometown Turin’s industrial monuments of early 1900’s before politicians demolished almost everything–this is the reason why the cover of MCIAA’s ‘Landscapes Of An Electric City’ released by THURSTON MOORE on his Ecstatic Peace! label is now a prime example of “ghost cover”. Polaroids played a distinctive role also during the band’s live performances: Roberto’s ‘On-Stage Live Action Series’ art installations testimony hundreds of shots taken while playing his trademarked “space toys”, which he abandoned in 2012 for primitive, modified electronic devices called “alientronics”.
Well known for his unique wordless vocalizations, his more sporadic spoken word poems reveal Roberto Opalio’s mastery in entitling all of MCIAA’s albums and pieces since the beginning. Roberto Opalio exhibited alongside artists such as MIKE KELLEY, RAYMOND PETTIBON, TONY CONRAD, JOHN CAGE, WILLIAM S. BURROUGHS, GERARD RICHTER to name a few. With his brother Maurizio he’s been under the radar of thousands of visitors during the opening days of the 57th VENICE ART BIENNALE in May 2017, when MCIAA activated the Studio Venezia project at the French Pavilion invited by artist XAVIER VEILHAN and curator CHRISTIAN MARCLAY.
‘Once you'll touch the sky you will never return to dust’ is a new 1-hour long instantaneous composition performed with a prepared mini-keyboard, a handmade shortwave receiver and Roberto Opalio’s patented alientronics and wordless vocalizations. It is a masterpiece of modern minimalism, an ecstatic voyage where time and space lose their meaning, thus glorifying the poetic lyricism of the “here and now”, that “eternal now” that other visionary artists and vanguards of the past have always dealt with, from FRIEDRICH NIETZSCHE to MUHAL RICHARD ABRAMS. “Towards the Sun”, headed ARTHUR RIMBAUD. “Space Is The Place”, asserted SUN RA.
CD comes in full-color gatefold digisleeve. The not-compressed mastering devised by MCIAA provides a natural, immersive listening experience. Cover art features one of the most stunning paintings by Roberto Opalio, created just before the album was sent to the pressing plant. Artwork design by MCIAA.

If you like Once you'll touch the sky you will never return to dust, you may also like: